(I ran at the gym on Wednesday and it was a really crappy run. My legs felt like lead. So for those who think I don’t have crappy days…I do. I didn’t even blog about this run, it stunk so bad 😦 But at least my bad day was on a treadmill and not outside, since my half will obviously be outside.)

Today was a beautiful day in the Burgh and my last long run before the half!! I decided to run my favorite route of all – the Three Rivers Heritage trail.

I fell in love with this route during my first year in Pittsburgh, and it was on my way home from work – win-win! It’s the closest thing that Pittsburgh has to Pony Pasture in Richmond, which is my favorite run of.all.time.

The trail provides some AWESOME views of Pittsburgh – from old railroad bridges to PNC Park to Heinz Field (blah). So I pulled out the iPhone and took some pictures! Or at least I tried to.

Because then, of all times, my iPhone decided to run out of memory and give me the following message: “Phone does not have enough memory to take photos. Manage memory in settings.” I tried deleting apps (Pinterest, wtf? Why do you take 2 GB of memory?) and music, but it still wasn’t letting me take pictures. Finally, I turned the phone off and on. Then I was able to take this gorgeous picture of Downtown Pittsburgh along the Allegheny River.

I also took a detour on the way back and ran on two of the Three Sisters – specifically the Andy Warhol Bridge and the Rachel Carson Bridge. The bridges had this sweet banner hanging from them, prepping for next weekend’s festivities! (Ironically, the third sister is the Clemente Bridge…this will be the bridge that signifies the end of next week’s half.) 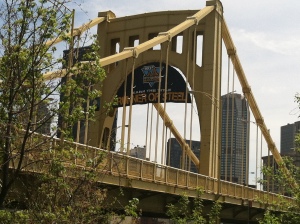 So the point of this post is that it’s easy to fill our minds with clutter. And I don’t mean literal clutter – I mean that I can rattle off Ludacris lyrics like it’s my job, while struggling to remember the books of the Bible.  I could name the celebrity who got a DUI the other day, but not some of the important figures in Scripture.

And that’s not OK.

My iPhone was filled with photos and apps – not that the photos or apps didn’t honor God, but they were occupying valuable space. Like any idevice or piece of technology, our minds have a finite amount of accessible memory, and it’s our duty to dedicate that space to honoring and executing God’s will in our lives.

She is clothed in strength and dignity, and she laughs at the days to come.
View all posts by CMN →
This entry was posted in Uncategorized and tagged bridge, Christian, iphone, outside, pittsburgh, technology. Bookmark the permalink.